Information center > Solar energy for the poor: facts and figures

Solar energy for the poor: facts and figures
+ 查看更多

Increasing access to energy is the key to ensuring the socio-economic development of the world’s poorest countries.

An estimated 1.5 billion people in developing countries do not have access to electricity, and more than 80% of them live in sub-Saharan Africa or South Asia. [1]

This problem is most severe in remote areas: 89% of people living in rural sub-Saharan Africa lack electricity, which is more than double the proportion of people without electricity in urban areas (46%). [1] For these people, even a small amount of electricity can bring life-saving improvements in agricultural productivity, sanitation, education, communications, and access to clean water.

Options for expanding access to electricity in developing countries tend to focus on expanding the grid, thereby increasing the centralized energy generated by fossil fuels such as oil, natural gas and coal. But this method can hardly benefit the poor in the countryside. Expanding the power grid in these areas may not be possible or too expensive.

This strategy also cannot help combat climate change. Power generation has caused 26% of global greenhouse gas emissions, although most of this comes from developed countries. By 2030, developing countries are expected to use 70% more energy each year than developed countries. [2]

Therefore, there is clearly a need for low-carbon methods that benefit the poor, thereby improving access to electricity in developing countries, and solar energy may be one of the solutions.

The earth receives more solar energy per hour than the world’s population consumes throughout the year.

Almost all developing countries have huge solar potential-for example, most African countries have about 325 strong sunshine days per year, which can provide more than 6 kWh per square meter per day (see Figure 1). The Desertec Foundation, established in cooperation with German and Jordanian companies, estimates that covering only 1% of the world’s deserts with solar panels can provide the energy the world needs

There are two ways to use solar energy: to collect its heat (solar heat) or to convert its light into electricity (photovoltaic power generation).

You can simply use solar thermal devices to heat or cool, but they are also suitable for drying crops, sterilizing water or cooking (see Table 1). Concentrated solar power systems (CSP) use lenses or mirrors and tracking systems to focus large pieces of sunlight into a small beam, which can also be used to generate electricity. The concentrated sunlight heats the water, which produces steam that drives the turbine, which is connected to the generator.

More than 90% of PV systems are based on silicon materials. The PV system connected to the power grid includes an inverter that converts the direct current (DC) generated by the solar panel into alternating current (AC) used by the power grid.

PV systems that are not connected to the grid may also include inverters, but they also require batteries to store the remaining energy, and charge controllers to prevent battery overcharging.

At present, the efficiency of solar thermal systems to convert heat into electricity is about 30%-compared with about 15% for PV systems. But in the long run, the development of new materials for PV systems-such as polymers and nanoparticles-should increase their efficiency.

Neither solar heat nor PV are new technologies, but they are not widely used to generate electricity because they are still relatively expensive compared to carbon-based energy.

The International Energy Agency calculated that in 2007, solar PV and solar heat contributed less than 0.2% of global power generation.

However, as the prices of fossil fuels rise, people are more and more worried about their supply (some analysts suggest that we may run out of oil as early as 2025), and people are becoming more aware of the role of fossil fuels in climate change The market environment will increasingly favor solar energy. Government subsidies may also help encourage the growth of solar energy.

Undoubtedly, interest in solar energy has grown dramatically in the past 5 years. The total new investment in solar energy in 2008 was US$33.5 billion—compared with the US$600 million investment in 2004, the compound annual growth rate was 172%. [5] The solar photovoltaic power generation capacity also has an impressive increase, from 2004 to 2008, it has increased sixfold, reaching more than 16 GWh 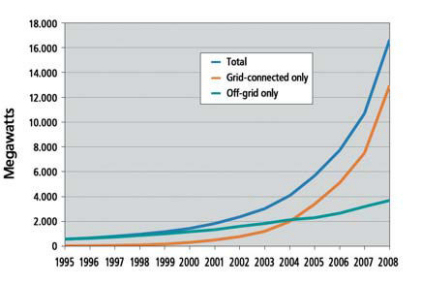 With the improvement of technology, the expansion of product production scale and the reduction of cost, the interest in solar energy will further increase. The goal of the solar energy economy is to achieve the same price as the grid, that is, the cost of unsubsidized solar energy is equal to or lower than the cost of the traditional grid.

An analysis by McKinsey & Company, a management consulting firm, predicts that "By 2020, at least 10 areas with strong light will achieve the same price for the grid." [7] But these regions are almost certainly within developed countries such as Italy, Japan, Spain, and the United States.

For developing countries, even if the same price of the power grid is achieved, an off-grid solution is still needed to provide energy to remote communities.

Although the cost of solar systems connected to a large-scale power grid will decline as solar panel prices fall, smaller off-grid systems are unlikely to experience similar cost reductions, partly because the price of batteries is still high.

Batteries may account for up to 40% of the cost of an off-grid solar system. And there are additional costs for replacing batteries, because battery life is unlikely to be as long as solar panels.

The efficiency of appliances also has a huge impact on the cost of power supply for off-grid solar systems. For example, a German engineer with experience in introducing PV systems into developing countries estimated that if a village can install energy-saving lamps and a new type of refrigerator and computer, the cost of supplying off-grid solar power to the village may be reduced from $35,000 To only $8,300. [8]

The most common solar photovoltaic power generation system used in rural environments is the home solar system, which consists of a solar panel, a battery connected to it, and a charge controller. It usually includes at least one lamp and a socket for other electrical appliances (such as a radio, TV or mobile phone charger

By 2007, more than 2.5 million households in developing countries had access to electricity through solar power. [9]

For example, Zara Solar Ltd is a small solar company that sells solar photovoltaic power generation systems to rural communities in Tanzania. The company, founded by a local entrepreneur, has received support from donors including the World Bank, Lighting Africa, Ashden Sustainable Energy Awards, and has installed more than 4,000 solar systems in northern Tanzania.

Despite higher capital expenditures and ongoing battery and maintenance costs, off-grid solar systems can save money. If there is a suitable financing mechanism, Zara Solar Ltd customers can recover the cost of solar home systems in less than two years.

Solar energy systems can also provide electricity for public buildings such as schools or rural health clinics. For example, Solar Electric Light Fund supports the installation of solar-internal combustion engine hybrid systems (more than 90% of the electricity comes from solar energy) to power health clinics in countries including Burundi, Lesotho, Rwanda and Haiti, which had just suffered a major earthquake in the capital Port-au-Prince in 2010.

In many cases, high-quality and clean lamps require very little power and cost is low, but can bring great improvements to the quality of life.

Most villages in Africa, Asia and Latin America rely on kerosene lamps and candles for lighting. Each household spends between US$40 and US$80 on such lighting, and they release pollutants that pose serious health risks, including respiratory or eye infections, kidney and liver problems, and cause death. Family fire.

Solar lights provide a safer and cheaper alternative. NEST Ltd of India manufactures small and practical solar lamps, each costing only US$35. They can be purchased in installments with kerosene-saving money in one to two years. More than 100,000 households in Andhra Pradesh and Maharashtra in India used NEST solar lamps, which reduced CO2 emissions by 20,000 tons per year
Release Date：2020-07-06 21:10
Share to：
PreviousIntroduction to Charge Controllers
No moreNext
NextNo more
Read more articles